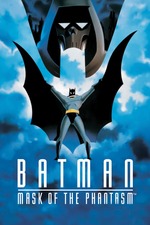 Batman: Mask of the Phantasm

Vengeance blackens the soul, Bruce. I've always feared that you would become that which you fought against. You walk the edge of that abyss every night, but you haven't fallen in and I thank heaven for that.

Mask of the Phantasm tells a story that is among the most daring and bold ever told within the Batman canon. It's tragedy is heartfelt, depicting Bruce Wayne as if he is trapped in a cell, jailed by an oath made in passion and sorrow immediately following his parent's death. He wonders if he deserves to be happy, if he has earned the right to live a normal life, and indulge in the pleasures Batman has continually been stripped of. Heroism is deconstructed here, no longer a sanctuary of virtue, but rather an asylum of deprivation. The villains he has amassed in his turn as the Batman have torn his life apart, beautifully conveyed in the fact that through a simple murder, the Joker once again deprived Bruce Wayne of the life he should have had.

Mask of the Phantasm is constructed perfectly, boasting incredible germanic artistic influences, a resounding and operatic score, a remarkably concise script and a masterful manipulation of tone and linear shifts. It's animation reflects the core of the Batman mythos, conveying volumes through a few simple contrasting visual cues. There's the World Fair as the idyllic future, a future Batman is deprived of with the separation from his old flame. Instead, he resides within the shadowy Gotham City, reflective of Batman's constant internal struggle, defined by the crime that poisons it. The Citizen Kane-eque storytelling structure is ingenious, visually articulating the life Wayne may have had if he had never embraced the Batman identity.

The mask of the phantasm is a facade that defines Bruce Wayne, a representation of the consistently conflicting notions of morality and heroism that in contemplation brings me to tears. If he falls into the abyss, he becomes the villains he has fought for so long. If he rises above, he can only look on as the life he deserves passes him by. This is the tragedy of the Batman character; that a virtuous life is not necessarily the more rewarding one. The depressing notion that happiness is deserved by a select few. Mask of the Phantasm is a masterpiece of animation, and of film in general. Among the multitudes of cinematic explorations of the Batman character out there, this one may just stand out as the diamond of the bunch.