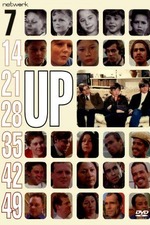 The concept of this documentary series has always fascinated me. Every 7 years they released a new entry in the Up series, detailing the lives of a fixed cast of characters. In other words, you'll be following these people their entire lives, in sprints of 7 years. It's quite genius really.

The first entry is somewhat of an introduction. It follows a bunch of kids from different walks of life and asks them what they think their future will look like and how they look at select adult issues. It's the shortest entry in the series, which was probably a smart choice as the potential for greatness here was pretty limited.

You're mostly just getting to know the characters, but because they're still so young their answers aren't that interesting. There were even moments where it reminded me more of some crappy TV show, but I'm quite hopeful it will pick up in later episodes. A pretty poor start, but that was only to be expected.