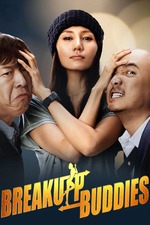 A decent romantic road movie by Hao Ning, sporting a solid comedy foundation. That's not a big surprise knowing Bo Huang was cast for the lead role. Together with Zheng Xu he forms a nice duo, as they undertake a haphazard road trip to take Huang's mind off of his messy divorce.

It's not unlike Zhi's Love Speaks released just a year earlier, which also featured two people stuck in the Chinese countryside. Breakup Buddies focuses more on male bonding and trying to get over a busted relationship though, not so much on forming a new one, which makes for a slightly different dynamic (though less than you might expect).

The comedy is only so-so and the film's a bit long, especially since the material isn't all that special or deep. But the cinematography is very slick and Ning made excellent use of the setting. Performances are also pretty decent. This isn't one of Ning's best films, but it's solid filler that passes the time quite effortlessly.