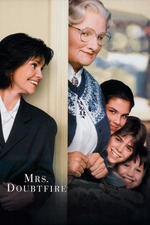 One of those films I never finished as a kid. I've never been a big fan of Robin Williams, neither of cross-dressing comedies. The combination of both was pretty excruciating, not in the least because the film lasts a whopping 120 minutes. But I was willing to give it one last shot.

It seems not much has changed over the years. I still dislike Williams in comedy roles, I simply don't think he's very funny. He does mediocre impressions and relies on his energy, that's about it. The cross-dressing element isn't very convincing either and the situational comedy is beyond irritating.

But it's not just Williams. The rest of the cast is poor too, the plot is lame and predictable and Columbus is virtually invisible as a director. It's just drab Hollywood comedy stretched out to match an excessive runtime. At least I watched it in full now, so I can safely never watch it again.