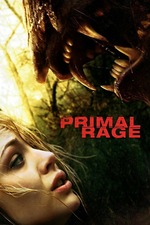 A peculiar creature flick. Generally speaking, these films tend to be quite predictable. Depending on the creature we're dealing with, we get a film with its own particular set of rules. Director Magee wanted to do something different with Primal Rage. The result may be a bit hit-and-miss, but the intention is definitely appreciated.

Primal Rage is a Bigfoot film, only our Bigfoot behaves like a veritable Predator and takes a few cues from King Kong. This means it's not a very elusive creature that only pops up at the very end, instead we're seeing a hunter that relentlessly kills people and doesn't mind showing his face early on.

Creature effects are decent and there's plenty of gore for the horror fans. Sadly performances are mediocre and the lore isn't all that convincing. The creature is supposed to be incredibly menacing, but in certain scenes it's borderline silly. Magee had some trouble finding the right tone for his film, it's still pretty decent filler though.