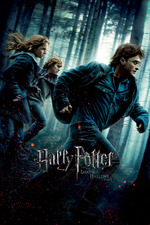 I needed a break from Bond and watch another British icon for a change with a group of friends.

The gold standard of how you do a two part finale of a film series unlike any other. This first part of being a more quiet and more character driven drama than a more of a non stop action packed thriller in Part 2 was a smart decision amongst others.

So much works to a tea. From the gloomy and beautiful cinematography, the excellent directing, truly amazing performances that brings these characters to alive more than ever, and how it really tested the characters both physically and emotionally in ways we haven’t seen them tasted before makes every emotional moment and aspects of fun it has in itself all the more impactful.

Truly amazing that despite being one half of a story, it still gave a whole lot in it to make the experience all the worthwhile.

Sad, beautiful, exciting, adventurous, heartbreaking. Part 1 is a film that shouldn’t work, but god damm does it work beautifully.

One less helper liked these reviews

One less helper is using Letterboxd to share film reviews and lists with friends. Join here.