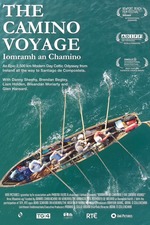 #31MoviesIn31Days is back - a concerted effort by me to watch more films, so I thought I'd start it in a month with 31 days. Aiming to be varied, watching stuff old and new, colour and black&white, from all over the world, to make it interesting. When I see a film at a cinema, I'll be making note of the venue, too.

The final movie of three that I watched on a long-haul flight, this was a wonderful little palate cleanser after watching an incredibly average sequel and then possibly the worst film I have seen, my only criticisms are that this does drag, and feels like a great TV documentary rather than something that needed a theatrical release - which is a shame, because the story is epic and the scenery is gorgeous. Even on a tiny screen on a plane seat, that was clear.

I really admire the guys in this movie, they're all incredibly warm and likeable, even if some stand out more than others. Loved how much of it was in the Gaelic language, with bits switching to English, French, Spanish and I think Basque as well?

Starts relatively strong, lags in the middle but once Glen Hansard ("Once") shows up, it picks up again. He's a wonderful presence and I can't believe he hasn't done more since Once's academy awards momentum about a decade ago. He's easily the best thing in the film - there's is a wonderful musical number that makes your heart ache.

I would have loved a bit more build-up to the voyage, to learn more about why these men are undertaking this epic odyssey, what was involved in creating the naomhóg, and ultimately connect a bit more with all these great people.

However, the films ends on an truly unexpected emotional gutpunch. Worth seeking out.

We're Back! A Dinosaur's Story