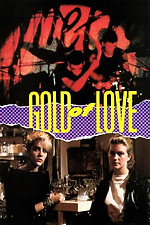 The Gold of Love

Do you ever wake up in the middle of the night, sweating, your heart beating fast, saying to yourself out loud: "Thank God, it was just a bad dream?"

I had been meaning to search out Eckhart Schmidts other movies after seeing der Fan (Trance) a couple of years ago and loving it. It's just that his movies are so damn hard to find.

Both der Fan and das Gold der Liebe are about teenage obsession. Where Simone just wanted to meet her idol R, Patricia wants to meet Gabi and Robert from D.A.F. (think early electro-pop/ the darker side of the Neue Deutsche Welle.)

That's where the similarities between both movies end though.

Where der Fan was a slow (burn) descent into madness with a terrifying conclusion, this movie is a bad dream from the opening scene all the way to the end credits. It is tense, disturbing and operates on its own sort of dream logic.

I didn't expect this to feel so raw and almost experimental. I loved seeing the weird situations Patricia kept finding herself in. I also loved the concert footage intercut with the story throughout, all the while playing droning white noise; very jarring!

All in all a very enjoyably movie almost on the same level as der Fan.

Dance with the Devil