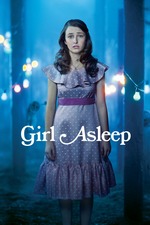 Art designed to within an inch of Wes Anderson's life and with some sharp tonal shifts this remains a very enjoyable and surprisingly deep watch due to it's level of detail. Every aspect of it has clearly been worked on with love and the young actors wring a lot out of it all.

It's barely 70 minutes long and has a genuinely creepy and symbolism laden dream sequence that works well but also feels over long and padded enough to make me wonder if actually they were either struggling to get to feature length or couldn't justify the work needed for the detour into nightmare if they kept the section a suitable length. That said it is as I said genuinely creepy and ambitious even if it overshadowed what had been working well until then, with sections hinting at darknesses that come to nothing and aren't entirely earned by the earlier sections but which do get across some of the momentous scariness of growing up.

Great use of music and dance, and a script that manages to be campy while also conjuring real things about the themes at hand.