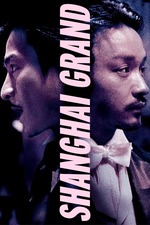 Leslie Cheung's resistance fighter is washed up in Shanghai and makes common cause with Andy Lau's wannabe gangster until a girl comes between them.

I've loved both leads work elsewhere but this film reminded me that whatever acting chops they definitely had they were two massive pop stars first. If you were to picture a period gangster movie starring two western pop stars of the period you probably wouldn't be too far away from how this came out, two charismatic attractive men playing dress up in 30s costume in a lot of dialogue free scenes with music over the top, there's a lot of playing with guns and a lot of aping other films set in the period.

It's not bad, they have a great thirties shanghai intersection set (and a swimming pool set and a drawing room set) and two vintage cars and reuse all of them over and over for the length of the movie but they do look great. There's a few cool visual moments, I liked the home movies hand held flashback sections although they were very short.

It's based on a momentous Chow Yun Fat Hong Kong TV mini series (which I've seen a bit of on youtube and can't match this visually, whereas I'd guess this loses out narratively) with huge nods to the deniro sections of the Godfather 2 (and the Shooting of Vito and the restaurant Sterling Hayden assassination from Godfather 1) and Once upon a time in america. Although what it most reminded me of was Mobsters, the crap 1991 pretty boys play with guns Christian Slater movie.

And it detours into extreme violence with some real wince inducing nail and hatchet torture and has a giant snake scene that comes from nowhere and reminds you that if you come to a Tsui Hark joint looking for more Shanghai Blues you might get more Chinese Ghost Story.

At the end of the day there's just too much slow motion gangster rival execution montages and not enough characterisation but if you're going to put two pop stars in a mock up of 30s Shanghai and make them look cool then Andy Lau and Leslie Cheung are good choices.