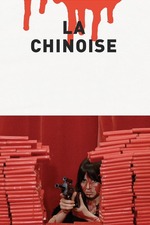 An interesting little novelty film from Godard. It’s centered around a bunch of young, good looking French actors (including a grown up Antoine Doinel from The 400 Blows), as they sit around a Parisian apartment discussing Maoist ideology and class-conscious revolution. The dialogue is a mix between Marxist-Leninist discourse and cryptic, pseudo-poetic back-and-forths between men and women concerning their passions and hopes. You can feel a lot of Jacques Rivette influence in this film.

The music of the film is a sporadic orchestral soundtrack that abruptly rolls in and cuts off without any apparent rhyme or reason. Maybe there is a reason to it, though I doubt it. Nouvelle Vague films often seem to relish in making chaotically unmotivated artistic choices for the sake of a post-modernist aesthetic.

Despite its mostly confined setting, the film does have a sort of vibrancy to it. It has a colorful, visual pop, a look that prefigures the theatrical/cartoon aesthetics of Wes Anderson. The film is full of evocative little cut-away titles and inserts of revolutionary magazine cutouts and newspaper clippings, which do a great deal in keeping the energy of the film alive.

It’s a pretty slow film, and I imagine it can be a fairly aggravating, annoying watch for anyone who’s not down with the style and approach. Even as someone who’s somewhat intrigued by the subject matter, I did find it to be quite tiresome and overly-long. It’s very difficult to be emotionally invested in the film, as the characters have no discernible personalities outside of their political views and their stylish wardrobes. Acts of violence are committed, but all of them are done off screen and are quite small In scale. The film lacks tension, but that said, it is not without its offbeat charms, and I don’t regret having seen it.