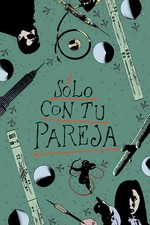 This early film by Alfonso Cuaron is a middling sex comedy with an incredibly refined look. Though technically a comedy, I think there was only one joke in the entire runtime that I found genuinely clever and funny. Other than that, I sat stone-faced while watching these dull jokes being realized with an aesthetic beauty that it was undeserving of. It’s plotted interestingly enough to keep you engaged, but ultimately it feels hollow and it lacks substance. The situations are improbable, but not in a way that makes them amusing, and more so in a way that makes them seem contrived.

This movie has Cuaron working with frequent collaborator, the great cinematographer Emmanuel Lubezki. Here Lubezki prefigures many of the colorful eye-popping visuals he would realize later in films like The Birdcage and The Cat in the Hat. It looks absolutely beautiful. Movies from that decade really knew how to make stylish use of green lighting and set design. Cuaron is seemingly inspired by French comedy classics like those of Jacques Demy and Jacques Tati. The film has a soft, gold-infused fairytale look to it. Whatever lenses they used, paired with the elegant art direction and the kinetic framing, create a fun, raunchy world of warm lights and soft skin tones.

The fast-paced cutting, intricate shot placements, and classical score make this a really fun spectacle to experience. With its use of operatic string music, the film almost seems to be striving for farcical grandeur on a Shakespearean level. It’s a little unfortunate the script wasn’t at the same level as the superior filmmaking technique. It has the playfulness of an Almodovar movie, but only a fraction of its inventiveness. It would still be a few years before Cuaron struck gold with great stories like Y Tu Mama Tambien and Children of Men. Still, it’s very fascinating to see his command of the medium this early in his career.

The Joy of Life