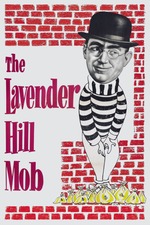 Entertaining British comedy caper starring Sir Alec Guinness. Features some very clever plotting that keeps you hooked the entire way through, and maintains a steady pace of wit and suspense.

I was extremely taken aback by how beautiful and surreal the Eiffel Tower chase sequence of the film is. It’s shot with the kaleidoscopic, experimental energy that you expect from an Orson Welles film. It’s a fun, hypnotic, disorienting scene, and it was easily the biggest surprise of this otherwise pretty normally shot black and white movie.

Jack and the Beanstalk