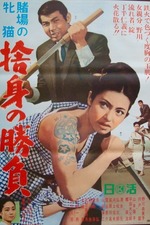 The final film in THE CAT GAMBLER series, and this time featuring the singular Jo Shishido!

Yuki finds herself caught between two gangs. One is benevolently just trying to run a theater, while the other wants to run them out of business. You know how it goes...

The story didn’t particularly grab me, but even more bland was the romantic interest for Yuki. Hard to follow Hideaki Nitani, but this guy is just nothing on screen.

What saved the film was the gorgeous cinematography, and of course Yumiko Nogawa and Jo Shishido. Nogawa seems to get more brash with each film, and she totally rocks this one, tougher than ever. Shishido is doing his cool guy thing with the dark sunglasses, distinct and strange cheek implants, and quickdraw gunplay. In one scene he’s idly tossing a gun between his hands for no reason and it’s like “Ok man, we’re all very impressed!” But that’s what I love about the guy, so as the mysterious X-factor seemingly working for the bad guys but charmingly interested in our hero, he helps boost the film for sure.

There’s a little bit of song and dance in the movie as well, which is always fun. Some cabaret dancers in the middle and at the end we get a couple handsome men crooning on stage.

This series was fun. Not spectacular, but nice to look at, entertaining enough, and Nogawa was spectacular. I’ve got to dig into her filmography more.

The Dragon and the Tiger

I Am A Man of Honor