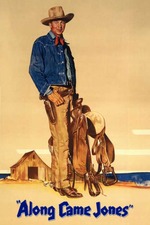 A dim-witted cowboy arrives into a small town and due to some coincidences he is soon mistaken for a notorious outlaw. He is saved from the townsfolk by the outlaw's girlfriend and is advised to leave but falls for her and decides to stay and face him.

Probably one of the strangest and most obscure movies in Gary Cooper's filmography, this western suffers from a split personality. It teeters on the edge between being a satire or a straightforward addition to the genre's canon. Naturally it fails on both counts and after the intriguing set-up it becomes pretty conventional and uninteresting despite the stellar cast.
Also, for a western this is pretty stagy picture. Heisler does nothing to spice things up and seems more concerned framing and lighting in the best possible way his stars rather than telling a good cinematic story.

Gary Cooper proves himself to be a good sport by playing what is essentially a parody of his screen persona. He is good but nowhere close to his best. Loretta Young is effective as the love interest that doesn't wait for the men to decide and takes things into her own hands. She is arguably the best thing this flick has to offer.
Dan Duryea once again plays the villain with his usual over-the-top style but his presence is jarring in the context of the light tone of the picture.

"Along Came Jones" seems to me a classic case of a film that tries to appeal to everyone but the end result is unlikely to satisfy anyone. Being poorly made just adds insult to injury. I wouldn't recommend it unless you are an avid Cooper fan or have an affinity for odd movies.