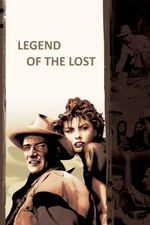 Legend of the Lost

Paul Bonnard, a pious Frenchman arrives in Timbuktu looking for a treasure in the Sahara. For his expedition he hires an experienced American guide, Joe January. A prostitute impressed by Bonnard's kindness and affability soon joins them, despite January's protests, and the three of them drive deep into the desert where tensions start to rise.

Insipid exotic adventure that manages to waste the potentially explosive pairing of Wayne and Loren because of the lousy script and the lukewarm direction. The picture is very pleasing visually (the desert has never been more beautiful than here, shot by Jack Cardiff) but is a complete dud otherwise. The pacing is problematic from the beginning and when the team arrives at the Roman city the film virtually grinds itself into a halt. The interpersonal relations seem forced and there is enough silliness and plot holes that it's impossible to view this as anything more than campy fun.

Acting is also far from stellar. Wayne manages to escape relatively unscathed by playing his usual type of hero. But Loren and Brazzi ham it up and there is a serious lack of chemistry between them and the Duke. You don't have to be a genius to understand than in a 3-character play that's a fatal flaw. At least Loren oozes sensuality and raw sex appeal, and I must say I'm surprised that some of her more risque scenes didn't fall victims to the Hays code.

If you're a visual kind of guy then you'll find much to enjoy in "Legend of the Lost" just ogling at the magnificent desert scenery and Loren's feminine curves. But if you also care for things like plot, dialogue and characters then I suggest you omit this obscure piece of celluloid because you'll find it as impossible to quench your thirst as the Sahara-trekking protagonists.

The Evil That Men Do