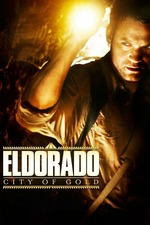 It is something like a pale version of Indiana Jones in Peru, with lots of soldiers, shooting and looting, but never enough adventure. Stuff which will insult your intelligence! I will say - stay away!