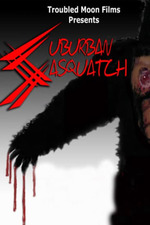 I'm such a Dave Wascavage stan. I genuinely enjoy his low-to-no budget aesthetic, I think he's incredibly creative, I think he knows how to have a great time, ("Someone should call the police, or maybe the SPCA!") and I think it's so clear that he understands the fundamentals of film-making even if it comes across as an entire solo-production.

It's so easy for art communities to become cynical and this always makes me sad because certain art projects and artists themselves are at the expense of couch critics or, like, just outright mean people. And yet, if you watch something like Suburban Sasquatch, for all its faults, it has a genuine understanding of comedic timing (A scene where two women feel like they're being watched, but that it was nothing, then a quick cut to the Sasquatch gingerly peeking from behind a tree!), theming (Nature's natural antagonism against man is as natural as man aggressively eating a hot dog!), or even standard horror pacing, (Like, every 10-12 minutes a new killing happens and it gets better and better!).

But because the fursuit has nipples and a the costume for a Native American woman includes the freshest pair of Uggs you've ever seen, this movie is 'brainless' or 'inept' or 'trash'. Yeah dude, aight, that's cool. /sarcasm

Sure, those aspects are goofy, but the thing with low-budget productions isn't whether or not its executed well, but if its executed well-enough for its attainable tools, and I think this is as good as it can be without a dedicated Director of Photography, a cast of friends who want to make a movie in a weekend (or two), and a man whose watched plenty of late-night monster flicks, I can't fault this film at all. And even then, why do I feel the need to clarify my enjoyment of Suburban Sasquatch? I love it! I don't have to explain it!

Is it a 2/5 star film? I mean, I have it listed as such for the sake of my organization, but it's a real 5/5 achievement in passion, so read that as you will.

BTW: if you love the movie, shoot him an email! Dave and I have had a back and forth for a year or two now. He's a real sweet guy and he loves what he does! Show him support!