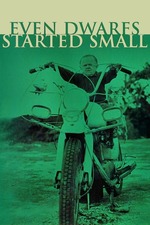 The concept of pairing “German” with “dwarfs” is substantial enough to interest most of those in search of original films as well as content, and Auch Zwerge haben klein angefangen does not disappoint. It is a thrilling, interesting peek into a very specialized community, and best of all, the collective’s ascending mischief has a direct relationship with the film’s progression. This colony of constantly giggling, jovial dwarfs are quite the troublemakers, passing the time and finding amusement in such activities as taunting other dwarfs who happen to be blind. Herzog’s preference for long takes renders the first scene in which the band of hooligans slowly sneak up on the blind (exactly reminiscent of the three blind mice) as utterly effective. They become discovered yet further tease while being assaulted by the blinds’ canes. At points the film progressed into shock cinema, as with a few scenes of animal violence, but they quickly passed.

There is hardly a time when the playful characters are not incessantly giggling, and indeed one of the film’s last scenes features a particular dwarf who is even smaller than the rest just laughing to himself for what seems like a full minute.

One mesmerizing sequence in particular has resonated with me for all of today: the dwarfs figure out a way to maintain a car (sans driver) slowly but surely accelerating in the lowest gear within a circle, which thrills them beyond belief. They move from running and acting as a matador to shelling plate after plate at the vehicle. It sounds like a foolish sequence but it is absolutely hysterical on every level: I was laughing the entire time at the absurdity.

As the first Herzog film I have seen, I can see why the man is so beloved in all domains of cinema. His confidence in concept and staging are extraordinary: it is clear why he famously appreciated Gummo so much. Herzog’s influence on Korine is quite apparent in both films’ adherence in depicting a self-enclosed, off-kilter community committing exceedingly demented acts of delinquency. Gummo took Auch Zwerge haben klein angefangen’s mischief to additional levels to great effect, but I was so struck at the utter congruity between the two films. It is interesting to see such method to Korine's madness of Gummo as I thought he was totally on his own conceptually, but Herzog's influence on it is irrefutable.

A wonderful starting point to delving into Herzog’s massive filmography, this was a solid, unusual treat.