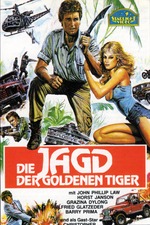 An action-packed Indonesian remake of WAGES OF FEAR? Not quite, but this is as close as it gets, with John Phillip Law, local leading man Barry Prima and (Captain Kronos himself) Horst Janson hired to transport a goddamn giant laser cannon across the country to free trapped miners. After a tedious and talky first third, the trio climb into a heavy duty flatbed truck and the film lets fly with wild stunts, big explosions and a notable body count that pushes it above most other films cranked out by Indonesian genre specialists Rapi Films in the 1980s. The evil Mr. Gull (Chris Mitchum with a blond dye job) wants to steal the cannon as Law & co. must race against time to rescue the miners before their air runs out. The ludicrous giant laser cannon (which, when revealed, looks like it was modeled off a child's drawing) isn't volatile cargo, but the truck is still forced to traverse rickety bridges, navigate landmine-laden roads and fight off attacks by Gull's goons in jeeps and helicopters. The mildly dangerous stuntwork and carefree vehicular mayhem seem more indebted to Hal Needham than Friedkin's own remake, which isn't a bad thing in this case. Released on VHS in North America by Embassy and TransWorld Entertainment under the preferred (if nonsensical) title NO TIME TO DIE, perhaps because HIJACKED TO HELL has even less to do with the plot.