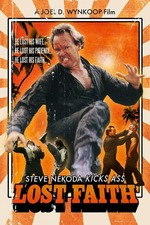 Shot in Florida, this Christian SOV action epic from director/writer/producer/star (and Tim Ritter associate) Joel D Wynkoop features plenty of roundhouses and probably even more yelling. As martial arts prodigy "Steve Nekoda," Wynkoop yells at the cops who don't do anything after his wife is kidnapped, screams at the toothless gang who mistake him for a former member, and howls in rage at The Master, the head of a white slave ring who Nekoda must face in the climax. After a friend scolds Nekoda for giving up on God (he yells defiantly in response, natch), he's miraculously born again just when he needs an extra power burst to take down the Master once and for all! Some say that religion is based on forgiveness, but Nekoda knows that having Jesus in your heart is just the edge a fighter needs to deliver sweet kicks to the face of evil.

Revenge of the Virgins