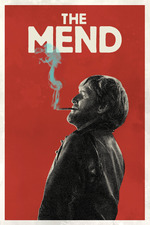 What a strange, fascinating thing this is. I kept thinking about Mean Streets, despite the lack of minor Mafiosi, and then one of the two main characters ends up at the Feast of San Gennaro and I thought, aha! But maybe that's just a Manhattan-dwellers thing....? But the red-light close-ups of the two brothers as they go on their midnight wander around the island, getting drunk, getting lost, and finding themselves in an eerie, fog-bound landscape - not a graveyard, but a movie shoot! - and steal some poor PA's walkie... yeah, this is Mean Streets all right, but re-imagined for a world where Johnny Boy's a deadbeat freelance web designer and Charlie's just trying to live a normal life and convince the spiky girl he loves to marry him, even though she can see through him and see all of the rage and sadness he keeps hidden.

The film-making is kinetic, loose and tight at the same time, and the camera is connected to the emotions of the characters rather than their words. That's to say, Magary is a real director, and this is a real film. Seek it out. In the former world, where arthouse films starring non-names were sometimes money-making hits, this would have been, I think, a success and we'd all be talking about it, arguing about it, swapping quotes. "Make me a fuckin' sandwich."