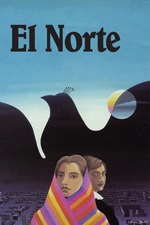 "We were filming in Mexico during the end of the López Portillo presidency, one of the last of the old-fashioned caciques to rule Mexico. One day, men with machine guns took over the set. I had guns pointed at my head. We were forced to shut down production, bribe our way out of the country, fight to get our costumes back, and start shooting again in California. Ironically, in the United States our extras were real Mayan refugees. They were the people the movie was about."

El Norte is about the nonsensical and brutal treatment towards Latinos. The film follows our main characters, Rosa and Enrique, as they try to flee Guatemala because of the Guatemalan Civil War. It is a film about our character's journey to the north, which is what El Norte translates to in English. The film shows the unfair treatment of Latinos and the unreasonable hard journey to gain freedom. Our main characters have a horrible living environment so they want to run away, and they should be allowed to. Why can't these people just have freedom? Why do they have to deal with racists and border patrol? They are given a terrible living style because for some reason Americans see them as nothing but labor. When is this cruelty towards Latinos going to stop? Probably no time soon, since this film came out in the 80s. It is disturbing, sickening, and depressing how relevant this film is to today. The quote you read at the top is from the director, Gregory Nava. That quote shows that this film isn't fictional in the slightest bit. In fact, the film was inspired by the director's real-life experiences as he grew up. This is a very well handled film and I'm glad the director knows how to handle this material. He never pushes it too far, but he pushes it far enough for the viewer to realize the problem. This is one of the most important and unique films you'll ever witness. The cinematography is very up close and claustrophobic, but at the same time, very beautiful. The cinematographer, James Glennon, will sometimes show the beauty of nature, and these are the most breathtaking moments, visually, in the film. Also, James Glennon did the cinematography for Election. No wonder that film is masterfully shot and one of the most underrated comedies that everyone should see like right now. Sorry for getting a little sidetracked, but I had no idea who shot this. The use of music is so fresh and just pure genius. The score ranges from so many sounds, but never feels like a jumbled mess. The music always fits the scene and the same goes for the very interesting use of sound effects at points. The lead performances from, Zaide Silvia Gutiérrez and David Villalpando are absolutely stunning. The emotion these actors give off feels so real, and this is somehow their debut performances! I honestly don't have any problems with this film. The only issues with this film are excusable. This is because the film was made on an 800,000 budget, which is absolutely insane. For the most part, this could've been a million-dollar budget film because you really can't tell. Every aspect of this movie is pulled off so professionally, but the budget does show during some of the more violent scenes. This was a stunning masterpiece from beginning to end that I will never forget. A monumental piece of cinema that everyone has to see. If you have HBO Max, please watch this because it is leaving soon. You seriously won't regret it and I don't know how anyone could dislike this film.