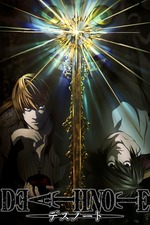 I was never a fan of anime. I think it's a bore that a series has 3 billion episodes, nothing against those who like it, but that was never for me.

And I started watching and after two episodes I couldn't stop. The script is clever, the characters are fascinating and the animation used is beautiful. Light, l and ryuk are my favorites (obviously).

I love the way in the head of light he thinks what he's doing is right, and at the beginning of the series he really believes that, and it's amazing to follow his transformation until he reaches the stage where he becomes a total psychopath. This whole transformation is done brilliantly.

Well, you saw a little bit of my passion for this anime. If you're like me and don't like anime with 800 billion episodes, give it a chance for death note. 1 season with 36 episodes and each 21 minutes long, is there anything better than that?

Ps: after watching death note i tried to watch other animes, but i couldn't get past the 3rd episode. So, for me, death note is the best anime of all time. It was the only anime I watched haha​​!!

Ps 2: I think that Netflix movie is an affront to all fans of the work (anime-manga). Can you believe I watched that crap twice? I don't know what happened to me at that time.