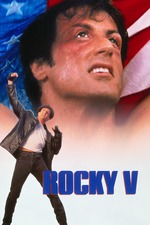 So for how long was Rocky actually in Russia? That is some impressive growth spurt! Rocky Jr was only 9 years old in Rocky IV and he’s now at least 14. Before you know it, he’ll be down the liquor store buying his mates alcohol before his 15th birthday.

It’s not just the awful continuity that really drags this film into the gutters: the script is bloody awful!

I’m all for a story about Rocky developing brain damage but the idea is severely underused and only serves the purpose of keeping Rocky out of the ring. There are a few instances of Rocky getting a migraine (and a strange, out-of-character moment where he threatens to violate his wife like a parking meter) but other than that the brain damage hardly plays a part. Had cavum septum pellucidum severely affected Rocky’s health, he’d be battling to live a normal life whilst attempting to train a worthy predecessor and that would be a lot more interesting.

I’m all for a story about Rocky losing his fortune and forced to return to his Philadelphia roots, bringing the franchise full circle, but it’s handled so poorly it feels almost insulting. Surely there’d be many opportunities for a legend like Rocky to make money without ever fighting again? The Rocky franchise began with a man overcoming the odds to get out of the slums and make something of his life, and throwing him back in there without a real reason is really disappointing.

I’m all for a story about Rocky training a protégé but Tommy Gunn is so unlikable, he’s not worthy of the Rocky mantle. I want to support and cheer for Rocky’s student, not detest him. He makes Rocky look like a gullible buffoon for training him. The Rocky franchise has many villains (Creed, Lang, Drago) but they’re all fantastic characters. Gunn is just so unlikable I can’t bare watching him.

Rocky has also developed into quite an uninteresting character, despite everything that’s happening to him in this film there is very little development of his character. But it’s his son, Rocky Jr, who is the most uninteresting. He is possibly the worst written teenager in movie history. Mood swings? Check. Showing an obvious interest in boobs? Check. Smoking on the street corner? Check. Between Rocky Jr and Tommy Gunn, it’s so difficult to decide who I hate most in this film.

Thankfully, this film isn’t the end of the Rocky Saga and things can only get better from here.