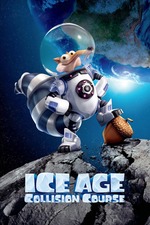 I enjoyed the original Ice Age immensely. It was basically an odd-couple road trip with Sid, Manny and Diego returning a human baby to its parents. Oh and the hilarious Scrat having adventures with his acorn. Best thing Blue Sky ever did.

Five films in and the law of diminishing returns applies. Since that first film they've added several more superfluous characters and both Manny and Diego now have completely different personalties.

As for the plot - nonsensical is not the word. A group of prehistoric mammals must save the Earth from the impact of a planet-splatting asteroid while Scrat scoots around space in a flying saucer. Yes, you read that right, and yes, it really is that dumb.

Blue Sky, you're done here. Note how Pixar has not yet sent the cast of Toy Story to the moon in order to thwart an alien invasion that threatens all of humankind. Learn from that!