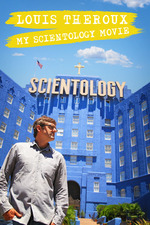 In this documentary Louis Theroux tries to enter the deep, dark world of Scientology ... and gets as far as the front door. Instead, he seeks the advice of those who have managed to leave the church (which is a near-impossible thing to achieve, apparently) on how Scientology works, and what could be the possible motives of multi-millionaire, David Miscavige.

I like Louis Theroux a lot. However, sometimes his mild-mannered, child-eyed persona (which should fool no one as he's obviously a very intelligent man) grates. He never seems to delve deep enough (as in "Louis meets Jimmy" in which he failed to even knock a chink out of a notorious sex offender), or at least as deep as the subject deserves.

We know that Scientology is all about money. It's a grand pyramid scheme with the (apparently) violent Mr Miscavige right at the top. But there's no satisfaction here, no questioning as to how the higher-echelon 'clergy' live with themselves. Granted, Louis is rebuffed by the church from the off, but that begs the question - why make this movie?

What we get are a few comic moments - mainly Scientologists turning up now and again and acting like crazy assholes - and vast stretches that are just not worth bothering with.

I would have hoped for something a little more hard-hitting, but this paper-thin documentary tells you nothing more than you probably already know.