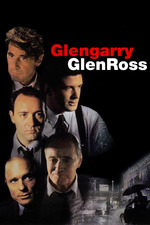 ...if your attention is not grabbed by that cast, you deserve to be locked in a functioning oven and thrown in a river. Glengarry Glen Ross boasts arguably the best cast of all time, a powerhouse of male names, even if pretty boy Baldwin is only in it for one scene.

Thankfully, these performances do not go in vain as they are imbued with a sense of being and character due to the very low-key, yet effective script. Being adapted from a stage play, it's mostly a dialogue and character centric narrative, which, when presented with such a cast, means the words are elevated beyond anything. A character script with a fantastic cast beats a story script with an average script any day.

Jack Lemmon basically portrays Gil from The Simpsons, he's utterly pathetic and you can't help feeling a bit sorry for him, even if he is a self-serving, trumpet-tooting old manipulator. (As all salesmen get to be at his age, or in fact, at any age.) He steals the show completely. An absolute legend of an actor.

Al Pacino is Al Pacino, no more needs to be said. Outrageous yet convincing as always, his cursing sounds so vicious. Ricky Roma? More like Ricky Motherfuckin' Roma.

Kevin Spacey gives his standard performance, fairly blank but simultaneously intriguing, which fits his character perfectly. He's constantly accused of being a prick the whole film, and it only provokes questions for the audience to have his character so blank. Spacey does that better that no other. And by the way, WILL YOU GO TO LUNCH?!

Alan Arkin, for some reason ousted off the poster by I assume Baldwin, despite having a much larger part, is awesome as Arkin ever is. He may be the least strong link out of him, Lemmon, Pacino, Spacey and Harris due to having the smallest part in the story really out of the five.

Ed Harris shouts and swears his way through Glengarry, he's the angry, action taker. He's definitely the most mean looking of the five, and his believable focused volatility makes him the perfect candidate for the role.

Alec Baldwin is in this for one scene and he's plastered in makeup. Either it's for character, (he plays a douchebag), or it's just Alec Baldwin, I haven't seen enough 90's Baldwin to know whether he was constantly looking like a model on a magazine cover. I think a bit too unbelievably sweary and one-dimensional his character is, I know he's a rich salesman, they only have one scene and they have to establish he's a prick, but come on. Then again, I don't know any salesmen, so the managers may well act like this around their employees. If so, then I can confidently cross out a possible career choice. It seems as well Baldwin has been playing Jack Donaghy his whole life, he was made for that damn part.

Jonathan Pryce, like Baldwin above, has a small part, and he doesn't do much, but of course, he's still awesome. He doesn't have much dialogue, I think due to the little he had was delivered with a poor American accent, being a Welshman and all.

Anyway, I'll leave it at that. Ross is a special film since it's so damn rare a congregation of such considerable talent is ever assembled, yet Glengarry Glen Ross brings the most able actors of it's time, and from before it's time too, and complements that with a fantastic, character-based script.