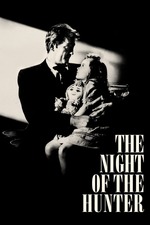 3 Stars to The Night of the Hunter. Yes.

Basically, well, I think the script is severely lacking in both character development and expositional transition. What's that, you ask? I just made it up. Basically, and I hardly ever say this, the film needs a tad more exposition.

For 60% of the film I was left wondering what the hell I was watching. There's entire scenes of things I don't understand that don't seem to affect the plot either. The entire beginning I just didn't understand. For the first hour or so I, and my mother, were utterly confused.

The scenes are held together by a loose thread, and with no characters to keep company, the film just drags with no incentive. Only when do we meet Ms Cooper does the film perk up, in fact this is where it enters it's element and is really excellent.

But I simply DON'T understand why Charles Laughton never made another film! There was absolutely nothing wrong the direction, it was outstanding. The shadows looking beautifully haunting, something only black and white films can do. The whole cast really have no problem.

I mean. ROBERT FUCKING MITCHUM. I want this man to narrate my life. He has the voice of an evil dictator, a bassy, booming voice that echoes the sentiments of power and destruction. His performance is easily the shining element of the film, giving a strong Terminator: 1955 vibe. The classic Lillian Gish commands the screen and easily becomes the best onscreen presence when Mitchum is doing walkabouts.

Unfortunately, the mishmash exposition and lack of character development for anyone but Gish does not do the film any favours, which is incredibly disappointing when you think it's a great idea for a film, the entire cast is excellent and the direction is absolutely wonderful. It seems I'm one of the few people who think that, though. The Night of the Hunter is a classic, however, for sure, and I completely agree it's a film all cinema fans should watch.