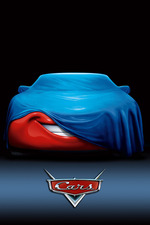 Pixar's first overblown and glossy mess!
Wow, how did I just realize how uninspired and dull this movie was?

So the first have of the movie we get to see Lightning acting like a selfish ego manic. At least Owen Wilson does a good job voicing him. I guess all vehicle humor was aimed at kids, but it felt so lazy and obnoxious after a while.

Like a typically Rocky esque sports movie, there is action at the beginning and at the end, and the middle is filled with slow character drama. The unfortunate part is the racing here is just mediocre at best. Especially the final race where the whole gimmick is that he is sleep walking thru it until Doc shows up. I am not a racing fan, but movies like 'Days of Thunder' make it really exciting.

Thankfully we do get one heartfelt Pixar moment, when Lighting and Sally take a drive down a country road. The scene is accented by a discussion about how little middle america towns waste away after being bypassed by new interstates.

I think we all know that Pixar went away from their usual standards with Cars, and instead went for the lowest common denominator with this concept that mostly appeals to kids. I really enjoyed seeing 'Cars 3' in the theater, and hopefully it holds up because the original now feels underwhelming and drawn out.