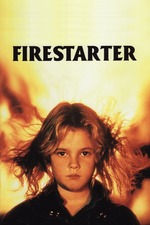 I never knew Stephen King wrote an X-Men comic, and they made a movie out of it 😉🤣 🔥🔥🔥

A government experiment gave him extraordinary telepathic abilities, and he passed them on to his daughter in the form of spontaneous combustion powers ... aka A 🔥FIRESTARTER🔥. Now they are on the run from government agents that want to turn her remarkable 🔥fiery🔥 abilities into the ultimate weapon. I'm not sure why this movie does not get talked about more because it is pretty badass for a sci-fi horror comic book version of a Hallmark movie. (Calling it a tv movie might be a little harsh, but it sounded good while I was writing it)

(Quip of the review: Who thought that just a few years after little Drew Barrymore was getting freaked out by E.T., she would be burning bad guys up with 🔥fireballs🔥!)

This movie features a great cast including Martin Sheen whose character has a similar feel to the one he played in 'The West Wing', and George C. Scott who plays this creepy-looking bounty hunter dude who somehow gets the little girl to trust him.

The 🔥firestarter🔥 powers throughout are awesome, and pay off big time during the explosive finale. I get that wind blows in her hair when she is summoning her 🔥red hot🔥 abilities, but how is this possible when she is in a building??

I will have to watch 'Logan' again, because from what I recall I think this movie heavily influenced it. I would say this would make for a solid first R rated movie for younger viewers, since it only has a bit of cursing and some intense 🔥fire violence🔥.