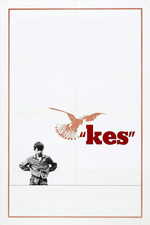 The thoughtful and enduring story of a young outcast who discovers joy in his life through the relationship he develops with a bird.

Labeling Kes a foreign-language film was just a little joke, but it definitely sounded that way based on how thick the English accents were. And I did have to watch the entire movie with subtitles in order to follow the story. Like I noted in the opening sentence, Kes is about a meek young boy named Billy who is a very hard worker, but under-appreciated. He does not get along with his brother and is often picked on by his classmates and teachers at school. Since he lives in a single-parent home, he wakes up early to work a job before going to school which results in him having trouble focusing in class.

One day Billy happens to go by a farm where he spots a kestrel nest, which is a kind of falcon. He takes one of the birds and becomes passionate about learning how to train it, which even results in him stealing a book on Falconry, since he cannot even catch a break with getting a library card. I found Billy's relentless passion for wanting to learn this new hobby extremely relatable, with how he does not have patience and instead stops at nothing to get what he needs as soon as possible to get started.

It does not take long before Billy becomes skilled in handling his bird that he names Kes, and it is delightful to see him handling it. But one of the most genius parts of the film is a wonderful moment between Billy and Kes, when the bird is not even present in the classroom. Instead, it is Billy on his own as he slowly becomes confident about describing the amazing experience of flying Kes for the first time to his classmates.

But we also see that when Billy is not flourishing with his hobby in Falconry, he struggles in other activities he is forced to take part in like Soccer during physical education class. There is a lengthy scene where he forgets to have a note that says he does not have to take part in Soccer, which forces him to be a part of a match with his overly competitive gym teacher. Billy does not even have the proper gym clothes, and is forced to wear a pair of shorts that are way too big on him. It is pretty amusing to see how the teacher cheats by both playing in the game and acting as referee. The moment Billy finally opens up about Kes to his peers, happens in a teacher's class who does take a sincere interest in Billy and wants him to succeed, and even takes the time to come see Kes for himself.

The production design of the film felt so authentic with Billy's grimy appearance, and the dirty cold look of the environment he lives in. It was so heartbreaking to see time and time again, how Billy gets picked on and singled out/punished. And you come to feel that he is not really phased by all of this, since he has used to being this outcasted scapegoat.

There was just something about the cover of this movie that I was always drawn to, and I am so glad that I finally made time to watch it since it was such an emotional and personal story that I loved getting lost in.

Unfortunately, this excellent movie ends on a sad note when Billy does not handle some money the way his brother requested. And his brother harshly retaliates by killing Kes. Billy obviously becomes filled with grief as he quickly finds where his brother dumped Kes' body. But then Billy goes right back to that strick business mentality, as he goes to a hillside to bury his beloved bird. And the film ends without giving us a sense of what the future might hold for Billy.

I felt the film was put together in such an emotionally impactful way that little details like what will Billy do next, are not needed. That's because we know based on what we have learned from his character, that while he loved Kes, he will likely train another bird to once again capture that feeling of awe he found in this one area of life, where for once he has earned control and becomes the master of a partnership he cares deeply for. And that trust is further emphasized by the fact that this is a bird that could have easily flown away ... but Billy is so passionate about the training, that he is able to succeed and fly Kes.

And that teacher relationship with a student with natural abilities, gets an additional personification by how Billy's encouraging teacher pushes him to talk about his bird, and we then see Billy 'fly' in his own way as he opens up and describes his passion for flying Kes.