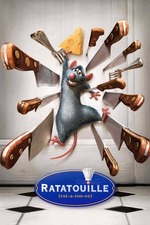 Some of my favorite movies include scenes of an artist in their element, and this movie pulls that off perfectly.

I remember seeing this as apart of a double feature at the theater with 'Transformers' when it came out. I had been more excited to check out 'Transformers', but felt pretty meh about it afterwards. But then I saw Ratatouille , and it truly surprised me with how well crafted and emotional this story of a rat with a passion for cooking was.

The camerawork in the film is so dynamic that it starts to not even feel animated. The highlight in this area is the scene where our main character Remy is in the sewer and is making his way to the surface, and we see him going thru all these passage ways and get his point of view of a rat in a world of humans. When he finally makes it we get these beautiful shots of the Paris skyline for the first time. I think this was the first time Pixar was so technically on point that the world they presented not only felt believable, but real. For example the swarm of rats do look like a true infestation.

Comedian Patton Oswalt does a fantastic job of voicing Remy. It works so well based on how good Oswalt makes the food sound. I adore those scenes where someone is tasting food and the background turns to black and we get to see visual interpretations of the tastes they describe in their minds.

The rest of the voice cast also does a great job getting lost in their roles including Brad Garrett, Janeane Garofalo, Lou Romano, and Peter O'Toole. I know the accents are not consistent, like Romano's character Linguini sounding like an American and Garofalo sounding French, but that never bothered me.

The hook of the movie is that Remy is able to live his dream of being a cook in a French kitchen by manipulating Linguini's actions by tugging on his hair. The montage that shows them figuring this out is super fun, and by the end of it we finally get to see Remy create these dishes, which is the best part.

There is this large theme in the movie about not stealing food, which I thought was a little silly since Remy/Linguini were working there, why should they not be able to take a little?

Those scenes where Remy is talking to Gusteau who has basically become part of his imagination was a clever way of seeing him be able to talk to another character that understood cooking early on.

Ego is a mean spirited food critic, who seems to have lost sight of his passion for food. It is funny that he says that negative criticism is fun to read and write, because that is not the case at all for me. I love writing about my enjoyment of a film. And when I do not like a film I don't get a thrill about trashing it, but I do feel obligated to explain why I feel a certain way. It drives me nuts when I listen/read some reviews who just say "I did not like it because it was boring". I find that so lazy, and if it bores you so much then don't watch it, and better yet don't review it, because I don't want to read/hear that. But I digress, back to Ego ; )

BTW, I love that his office is in the shape of a coffin. What truly ties this film together is the moment where Ego eats the Rataouille and is transported back to his childhood, where he felt love and comfort from eating this dish when his mother made it. I always tear up during this scene, since I am a sucker for nostalgia. In this latest watch I was moved even in the moments leading up to this, because they are built up so well. What a great character arc for Ego, and I even think there is some merit to the fan theory that the old lady at the beginning of the movie might just be his mother.

The weakest part of the movie would have to be the pacing, I thought some of the scenes with the villain chef Skinner were a bit too long, and the scenes with Remy dealing with his hungry family. Although the element with Skinner wanting to sell off the integrity of Gusteau's cooking to make lots of money on frozen meals was an interesting touch. It takes a jab at how in many families the art of cooking has faded, and is being replaced with these lower quality, unhealthy, but quick microwaveable alternatives.

Finally I love the nontraditional score which made it feel less like a kids film, and more like a real french drama in the kitchen. The rhythms are very complex and are a joy to listen to.

The Cat Came Back