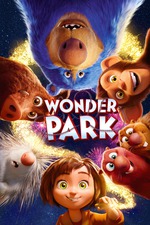 A little girl's imagination comes to life in the form of her very own amusement, in this sweet but ultimately bland family friendly.

"We put the wonder in Wonderpark."

This film could best be summed up as Ellie from Pixar's 'Up' + that Rollercoaster Tycoon game + 'My Neighbor Totoro'. And while all the moments of the main character June with her parents and friends were heart-warming ... what should have been the exciting element of an amusement park felt so glossed over.

The first part of the movie is spent in the real world where we get some excellent character development between June and her loved ones. It is a joy to the mother inspire her, to dream up all these amazing attractions for Wonder Park, that she makes official by whispering them into the ear of her monkey named Peanut.

In the spirit of a Disney film, we then get a really sad moment that pushes the plot forward by causing June to lose the creative spirit that lead her to create Wonder Park. After a few events take place she ends up wandering through the forest and is magically transported into the remains of the park, 'Wizard of Oz' style... kind of.

We are then thrown into this world with her imaginary characters that we barely know, that are expected to somehow carry the movie as June adjusts to being in a real-life version of her imaginary park. What would have really helped make these character's stand out is some solid comedy, but for the most part the attempted laughs fell flat for me. I liked The Porcupine, Bear, and Beavers well enough since they had some personality to them. But the Boar and Monkey who were the more serious ones, felt very flat.

All the animation is solid and there is even a bit of camera technique inserted in there to spruce up the visuals, like a rack focus whenever June heads off for Math camp. Wow, was all that Math camp stuff nerdy ; ) . There are plenty of decent action set pieces that looks great, but there is basically little to no build up for how the characters get into these predicaments, that end in a similar ambiguous way as if they never happened.

This is a forgettable animated feature that will mostly just appeal to young children. So I recommend saving a few bucks and waiting for this one to hit home video.

Why does there always have to be a 3rd act slump, and so often it only happens because someone did not fully explain to the others about a circumstance. And of course, June's desire to want to forget about Wonder Park manifests itself as a gaint cliche portal in the sky. But don't worry the kids will like it because of the so-called 'zombie monkeys'.