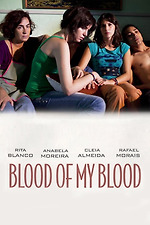 Blood of My Blood

Portugal’s submission for this coming Oscars, Blood of My Blood, justifies its slow progression by patiently allowing excruciating moments to play amongst soup operatic drama. Until the soap opera takes a strange turn in the final act, the manufactured-cum-realistic approach effectively comments on the depths that a family will go to protect each other.

The Fialho family lives in an impoverished neighborhood in contemporary Portugal. Held together by a stern but loving mother, Márcia, the family deals with a young son named Joca who has a penchant for making terrible choices, including the one that gets him in debt to a sadistic drug dealer. His older sister, Cláudia, has fallen for her married teacher, a fact that sends her mom into a frenzied quest to right the “good kid.” Also in this mix, a middle-aged aunt spends life on the fringes in loneliness, desperately hopeful that a man will come and swoop her away.

Grounded in the reality of everyday, Blood of My Blood views each family member as they attempt to keep from shattering. The mother, a hard-nosed anchor, has spent too much time trying to pick up the pieces. She wears the burden of life as a single parent on her every being. She’s just past middle-age but her cheeks have turned to stone, locking her eyes into a perpetually terrified gaze. Like most mothers, she’s hidden from the turmoil that her children find themselves in until it’s too late. The narrative generates strength from watching Márcia deal with her shocked emotions after we, as viewers, are afforded the ability to see her children’s scenes unfold. In one loving moment between Cláudia and her teacher, both characters remain sensual, earnest, and believably connected by a mutual love. As a result, Márcia’s understandably enraged reaction thrusts us, the knowing observers, into the same unease as the characters themselves: torn between love and logic.

The camera angles often stare from inside walls or float between characters. As though Hou Hsiao-Hsien has discovered a script for Days of Our Lives and decided to shoot it in the Favelas, Blood of My Blood chooses to let its camera move concurrent to the action,sometimes the lens even swoops away from the main scene to a character unknowingly pensive in an adjacent room. The camera’s omniscient, yet obstructed, gaze, likewise matches the narrative that takes us inside the lives of each character alone as well as amongst the other participants. For instance, the film begins on a man we will come to see as having no moral compass, except here he’s struggling to get his small daughter to eat her soup. Like the loving Fialho mother, even evil men are tethered to the whims of their children.

By the end, the soap opera goes one step too far in Blood of My Blood, causing the observant, lush style to peal off and bend into the realm of farcical melodrama. The final moments still offer some of the most trying emotions I’ve ever seen on film, but the interactions between mother and daughter, where the mid-section of the film generates most of its power, falls flat. It’s the aunt, beaten and willing to stop at nothing for those she cares about, who makes the shocking final choice and steers the narrative to it inevitable end.

The vast majority of films are made as though drama happens for the pure fact that a camera has arrived. In contrast, Blood of My Blood remains dedicated to making it seem like the camera has showed up because something might be about to happen. A courageous and thoughtful look at a family on the brink, Blood of My Blood succeeds at sending the viewer into relatable situations as they are about spiral into the nightmarish realities of awful personal choices.