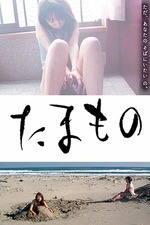 OhmygodIlovedthisfilm. I don't want to oversell Lunch Box, but I truly believe this to be the best post-2000 pink film I've seen. Ignore the awful UK DVD cover that makes it look like a latter day Jess Franco film (no disrespect to latter day Jess Franco films), this is a masterpiece of sex and sensitivity from Satô protégé Shinji Imaoka. The last film I watched by Imaoka—Uncle's Paradise—is an extraordinarily out of control film (a man CUMS on a SNAKE). Lunch Box, while not without its dollops of strangeness, is a much more restrained affair. And though Imaoka learnt the pink ropes from Satô, he is a very different director.

We follow a lonely mute woman as she attempts to connect through sex and lunch preparation. She gets into a relationship with a postal carrier, who eventually begins to find her too clingy as she attempts to make him lunch every day and gives relentless back-hugs. This film gets aspects of Japanese life to Kore-eda-esque levels of perfection. Yumika Hayashi is utterly real. Her desperation to connect and the way she is pushed away breaks the heart. I have met so many people here who are this character. What a tragedy that Hayashi died so young. I cannot think of a better actress that dabbled in AV as well as more legitimate cinema. She is mute, yet she communicates so much. I loved her in this. I started to tear up as the credits rolled, the thought that she was no longer alive running through my head. It is certainly her show, but the rest of the cast is spectacular too. Mutsuo Yoshioka's brattish postal carrier could be torn straight from the Japanese office I work in—drenched in conformity and embarrassment. Even Kiyomi Itō's tiny bleak cameo (so happy to see her here) rings with a brutal truth.

While this is grim in themes, it is delivered with a deceptive lightness and energy. Its passion and sexual intensity is alive. Reading up on this after watching it, it does not surprise me that the sex on screen was real. It is so full on. Imaoka approaches each sex scene different. When our two leads have sex, he focuses on faces, the camera shakily joining the action. When sex is meaningless, he brings out trashy wide shots. Even the film format adds extra meaning. Instead of going for typical pinku 35, Imaoka shoots on grainy beautiful 16mm, giving warmth and grit to every shot.

Though the film is quiet, it's not without its feverish touches. The "King of Bowling", the perfect and bizarre ending, a handful of strange tangents. These oddities don't feel out of place and instead blend nicely with the film's affecting story. This hooked me from its opening scenes and left me floored. I'm really glad I watched this after living in Japan for half a decade. I don't think it would have had quite the same effect without that experience.

Spring in a Small Town