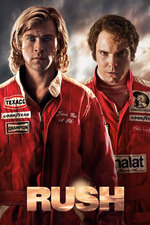 My liking of Formula 1 racing all began over 10 years ago when I visited Spain and watched the Monaco Grand Prix, I think it was, on television. Ever since then it has always intrigued me. I hardly ever watch it but when I stumble across it on NBCSports or something I check it out. I don't understand the intricacies of the sport or the cars but I find it fascinating. NASCAR, however, is a joke to me; I know that is disrespecting the drivers who put their lives on the line to do what they do but, to me, there's just no comparison between racing around a circular track and racing on a real, amoeba-shaped track. And that is one of Ron Howard's greatest feats in Rush: he made it clear that this wasn't boring or something to be cast aside.

The look and feel of this film, especially the racing parts, were phenomenal. It was gritty and a little chaotic--descriptors that I imagine are right inline with actual F1 racing. Howard made it that at no point could anyone look down upon the sport or the drivers, despite any perceptions of a layman. That was vital. Bringing the danger to the forefront helped give this film the edge it so needed, given its subject matter--danger that is often forgotten when watching from afar on television.

Where I did find fault was with the handling of Niki Lauda's ascension to the top tier of F1 racing. One moment we see him as a rookie on the circuit and seemingly in the next scene he is an internationally known, top driver; it felt like we went right from A to C and skipped B. The pacing, I guess is what it is, was kind of off. I guess the same could be said of James Hunt as well. Both Hunt and Lauda made the jump from Formula 3 and irrelevancy to Formula 1 and battling it out at the top of the table within a few short minutes of screen time. This issue is also tied into something else that bothered me: were there no other good drivers at the time? How is it that these two could swoop in and instantly top the rankings? I understand that Rush is a film about the rivalry between Hunt and Lauda more so than F1 racing, but giving more time to the sport as a whole might have been beneficial. As a result, it was made to seem like every other driver sucked and these two were able to easily dominate the field; something tells me that that was not the case. But after watching this film, I don't know.

Hemsworth and Brühl deserve recognition for their performances here. The former I've seen in such acting-not-required films like Thor, Avengers, and Cabin In the Woods while I've only seen the latter in Inglourious Basterds. The actors didn't exactly deliver special performances in those films but that's not necessarily a critique. Here, though, good performances were necessary as the film focused on the dynamic between the two racers, and Hemsworth and Brühl acquitted themselves just fine--nothing spectacular but not something to be cast aside either.

I am glad that another F1 film was made. It is a sport that I admire from afar so I enjoy getting big screen productions to satiate my appetite. I would still like to see a F1 film about a driver and his involvement in the sport, rather than another biographical depiction of a duel between two drivers (i.e. Rush and Senna).

Not the film I was wishing and hoping for but a good, entertaining one nonetheless.