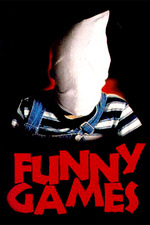 Funny Games. Michael Hanekes critique on violence in film, and more specifically, his in-depth analysis into why people enjoy the violence that they usually endure. It was difficult to sit through the first time, and it was just as uneasy the second, despite knowing the outcomes,. As a second watch, I can safely say not only is it my favourite movie, but it reinforces my thoughts that Haneke is just an amazing filmmaker and writer.

With Funny Games, I think his writing especially excels. He knows what his doing, he knows how he wants people to feel, and he, in a very sneaky way, employs his own thoughts and opinions into the matter. The title itself I take as more of a judgement from Haneke to the viewers about how they view certain aspects of certain films. Obviously, and particularly the topic of violence. Let's be honest, we watch Kill Bill with smiles around our faces, pretty much laughing at these guys and the deaths The Bride hands out with her katana. But why do we like it and find enjoyment in that kind of violence? Take it as Uma being the bad guy murdering innocent men doing their job and we'd probably be disgusted by the scene. If we didn't follow The Bride, would we still see her as the 'badass good guy'. Obviously this isn't a critique of KB and purely just an example, but hopefully that creates a better picture as to what Haneke seemed to be asking and answering.

What Haneke particularly seems to focus on is how an audience is going to perceive certain events, and how it's going to change the relationship to the characters, when said events occur. We can't help but be won over by the family, whilst drawing hate to the invaders, which we feel the moment they introduce themselves. Haneke essentially controls our thought processes throughout the movie. Making us double take at multiple points to see if we are actually enjoying what we're watching. He does this through making the audience feel hopeless, useless, eye-witnesses to a villainous and miserable set of events. Most importantly and especially, defeated. By the end I couldn't help but think that the audience are just there to feel like shit. I highly doubt anyone with a moral compass can walk out of this film in a good headspace, or one that doesn't make them hate the characters and feel like they wasted their time (in terms of narrative).

Overall, I think the point is to feel bad and ashamed about what we usually watch and enjoy when it comes to violence. I think that's evident through the reviews and thoughts I've seen on the people not only on Letterboxd, but anyone else I've talked to about the film. We don't necessarily enjoy watching it because it doesn't go our way. The hatred we feel isn't towards the film as a whole, it's to the narrative. We enjoy the film, but not what we're watching. The tables have turned and the violence is now done to the people we don't want the violence done too. We have a miserable time watching the film because it's not what we want to see, it's merely a bad dream, the bad ending. We don't want to believe what's happening. At a certain point in the film (you know which one), I think this is especially drawn out.

Funny Games takes a genre, flips it on it's head and shits it out over the people that made it's conventions popular. It completely ruins any thriller or horror aspects it uses, mostly like a satire piece would. Which is a fair way to look at it, a satire piece. Ruining any suspected climaxes, it keeps people on their toes, does something new and spoils all of the fun some of the conventions usually bring. Mainly tension.

This serves as a wake up call. At least, that's how i interpreted it on a second watch. Whilst the violence in film is usually (unless based on history) fictional, we're still watching people get murdered, but we enjoy it because the guys we want to win always do. We don't care about the villain and what has happened to them, despite any emotional backstory. For example, we don't feel for Jason Voorhees when his killed. Nor do we for Jack Torrance, Alex DeLarge, Hannibal Lecter amongst the many other main villains and side characters. Even as previously mentioned, the people in Kill Bill. This makes us realise, when the roles are reversed, we suddenly don't like violence. It's a double-standard that was interesting to explore, and Haneke really hit the nail on the head in answering "Why do people like film violence, and what causes them to want more?".

Haneke perfects a much needed, much unpopular, and widely unaware criticism.