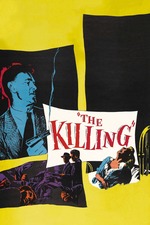 *writing this in the voice of the narrator from the Killing*

Its one A.M. sharp. Amateur film fanatic PinHeadLarry pops in Stanley Kubrick's The Killing. As the chilling noir robbery film opens up he is exposed to a world of squinty-eyed, fast talking smokers with an eye for money. All of this is narrated with the tact of an auctioneer.

It's now shortly after one. Johnny Clay, played with cool intensity by Sterling Hayden is hatching a daring scheme to clear out a horse racetrack of all its dough. Things start to fall into place. It seems perfect. Then one of the men tells his woman.

This dame also plans a heist of her own. She is going to run off with her husbands share (or more) of the money and live with her secret lover. Will she succeed? Will anyone succeed?

1:45 am. A wrestler is enlisted to start a fight at the bar at the same time a hired gun is employed to shoot a horse. This combined commotion will give Clay the time to slink down into the basement and begin his heist.

All around the table there is fluid camera work, classic noir lighting, and crazy Kubrickian characters. PinHeadLarry is enjoying himself greatly.

It's nearing two. The robbery stage is set and the first pieces begin to move. It's a tense affair.

The wrestler starts his fight. The ensuing match of 1950's Mortal Kombat is especially entertaining.

The hired gun shoots the horse. But things go very wrong on his end. Watch the film to find out.

After two. Sterling Hayden has successfully taken the money room. His entry with the clown mask and the semi auto shotgun is spine chilling in combination with the expressionistic lighting. Things are heating up.

They make their getaway.

The dame and her secret man show up to complicate things and make a grab at the money. Blood is spilled. Johnny Clay has to make a tough decision.

The film is wrapping up. There are only a few more stages left. Many things go wrong. A very suspenseful scene at an airport ends in heartbreak. The credits roll.

PinHeadLarry is smiling. The movie contained firecracker dialogue and unique narrative style for the time it was released. The film wasn't as heavy as other Kubrick features but it contains classic camera work that only the director knows how to pull of seamlessly.

It's around 3:45 and PinHeadLarry goes to sleep.

The next morning, around 11, PinHeadLarry sits down and starts thinking about his review he is going to write.

Shortly thereafter, he finishes his review and he makes a fateful decision.

He's going to watch it again.