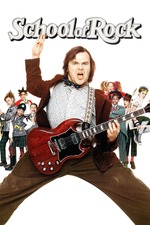 "I have been touched by your kids... and I'm pretty sure that I've touched them."

So many people dismiss this film as just another Jack Black comedy, and that couldn't be farther from the truth. 'School of Rock' is one of those films that is actually much better than it deserves to be, and that's thanks to the direction of director Richard Linklater, and a strong script by Mike White. Wile this could have been just another "loser-to-hero" comedy, the film is actually a great character driven film full of heart, fun, and great music. It's also arguably one of Jack Black's best performances.

Black's character Dewey Finn may look like like every other movie slacker you've ever seen, but in a way, he's more than that. Dewey is a guy who isn't ready to lose his friend, and his past, to the future. He's trying so hard to hold onto all of it, that he's let his life completely stall out, and that is something we can all relate to. It's a great performance, and he's not the overly obnoxious side character he has been type cast as for so long. This is a more mature version of Black's career, and one that would be great to see him do more of, much like his role in 'King Kong'. Black isn't the only one who is good here, it's his entire supporting cast of younger kids that really stands out. Each and every one of them has a standout scene in the film, and you care and like all of them. They're not just stock characters. Mike White also stars in the film as Dewey's best friend Ned, and Sarah Silverman plays Ned's pushy girlfriend, Patty. Both are very good in their roles.

It's thanks to Linklater and White that this film is even nearly as good as it is. In a way, it's really an indie film masquerading as a studio comedy. Linklater has been a favorite amongst cinemaphiles for some time, thanks to his work on films like 'Dazed and Confused', and the 'Before Sunrise' trilogy. He's a director who excels at character work, and really making sure every character in his film gets a chance to standout and be remembered. He's never let go of his indie sensibilities, and that's what makes the movie so special. Thanks to White's script, which is very clever and well written, the film features excellent dialogue and character interactions as well. The chemistry between all the characters feels real and natural, and not over the top and fake. In fact, even going against the grain of how a film like this would normally end, makes it that much better. It's nice to see a movie that doesn't necessarily go for the happy ending. The final part that makes this film so great is the soundtrack. They've secured so much great classic rock for the film, it really gives some extra character and flow to the film. It really defines many parts and scenes, and brings the film fully to life.

'The School of Rock' is a special little film. What is sadly considered a standard studio by comedy is actually much more than that. It's a great character film with great music, an excellent script, and an indie movie vibe. Thanks to Black's great leading man performance, White's script, and Linklater's direction, the film fires on all cylinders, breaking out of its shell to create something memorable. It's too bad many look over the film, and it really deserves to be watched and evaluated on its own merits. They just might be surprised just how feel good the film turns out to be, and how much they really enjoy it.