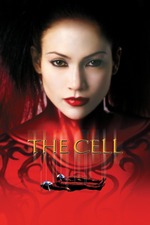 "If we aren't stopping him, he won't stop himself" (actual dialogue in this film... about a serial killer).

Tarsem Singh's The Cell is a film about child psychologist Catharine Deane (Jennifer Lopez), who has specialized herself in virtual reality treatment for coma patients. When serial killer Carl Stargher (Vincent D'Onofrio) falls into a coma, FBI Agent Peter Novak (Vince Vaughn) hires Catharine to delve into Stargher's consciousness to save Julia Hickson (Tara Subkoff), who is trapped somewhere by Stargher.

If there's one positive thing I can say about this film, then it is this: the cinematography is truly creative. There's some great variety in the color schemes, locations and mise-en-scènes that gives the film a distinctive look. Jennifer Lopez' performance wasn't that bad either, as she tries to infuse emotion into a film, in which emotion is almost completely devoid. For a film that struggles to show how its protagonist has a unique quality to her, I can at least appreciate that Lopez does her best in her delivery and mannerisms to make her character stand out. Also, Vince Vaughn's permanent duckface (was he trying to copy Michael Keaton?) was the single most funny thing about this film.

There are a lot of things I can unpack, when I have to talk about the film's flaws. The distinctive look of the film deserves a far better story. The story and characters of this film are so generic, that I found it hard to care. There's nothing in the writing that makes the killer or the investigators come off as memorable. The trauma that Stargher has gone through never evoked any emotion in me, because it is always seen through the eyes of an outside party (Catharine). Why not focus your energy on immersing the audience into Carl's trauma, i.e. show his past from his perspective? If more time was spent on showing the warped mind from Carl's perspective, the film could have stood out more from its peers within its genre! The lack of emotional investment brings me to another problem. Aside from Lopez, all the other actors are so bland and emotionless, that I couldn't help but zone out most of the time. Vince Vaughn acts like someone who doesn't want to be in this film, and he's probably one of the biggest miscasts I've seen for some time.

Another thing that annoys me is the film's attempts at creating a disturbing atmosphere. The film uses wretched imagery and a horribly manipulative score that only makes me think that this made by some edgelord, who's trying too hard to be deep. While it does make the film look distinctive, it also only exists to hide the fact that the story is so painfully boring, and no amount of (forced) religious symbolism can make up for that. Making everything look like something from the music video for Closer by Nine Inch Nails does not mean you have deep material to convey! Especially since the payoff is just to show us that Stargher is what happens when you remove all the mystery from Jame "Buffalo Bill" Gumb from The Silence of the Lambs!

In conclusion, The Cell is definitely not a film made for me. If you are the audience for something like Neon Genesis Evangelion or Aeon Flux, you might end up enjoying this.