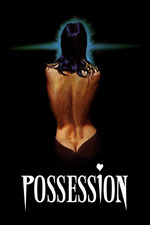 There is so much to say about this movie that I don't really know where to even start. Andrzej Żuławski wrote and directed this film and I'm just in awe at what he created here, first off his direction and the decision to use mostly wide angle lens throughout the film was amazing, the wide angle shots really gives you alot of context to what is around the characters and he uses this by mirroring the chaos of what is happening in the film with the items in the background. The visual style of this film works perfectly, with its natural clean style, it features alot of cold blue hues and simple lighting that fits with the style of story being told. The story I will get into more later, but it centers around a divorce in the beginning and from what I've seen this was a very personal project for Andrzej Żuławski, due to his divorce right before this film was made. This film is absolute chaos through out and it never lets up, it starts as a huge crack in a relationship and explodes into a supernatural thriller that had me scratching my head but in a great way. The performances from both Isabelle Adjani and Sam Neill are incredible, two of the most unhinged characters I've seen and they pull it off perfectly. The score for this film is very subdued and minimal and it really worked for this type of story. I'm gonna go into some of my thoughts on the film now that deals with the story, but if you haven't seen this it feels timeless and is a must watch in my eyes.

MASSIVE SPOILERS AHEAD
These are just my personal views of some of the stuff in Possession.The film starts off with the Berlin wall being the first thing shown and I'm sure it has some political meaning that is unclear to me, but I think it was a perfect decision to set this with that always being on the viewers mind, because it feeds into the feeling of division between Anna and Mark and later on in the film they separate into different sections of Berlin which further cements this, with both sections feeling so different. Another thing the film uses is its blue tones to simulate the loneliness and divide between both characters.Mark and Anna's relationship is totally in shambles and that causes them to become versions of themselves that are exaggerated, which is why much of the conversations are wildly violent and full of screaming. Mark is just a simple guy that is possibly a spy I think, that is destroyed by his wife stepping out on him even though they were both very unhappy judging by that scene where they are in bed in the beginning, he becomes very obsessed with figuring out where his wife is and who her new lover is etc. There is a scene that shows some of the surveillance guards in the towers of the Berlin wall, and I think Marks actions of hiring detectives and such are in a way suppost to be a reflection of them always watching, while also depicting Mark as controlling and a bit obsessed. Anna is a woman that is unhappy with the person her husband is and as well as herself it seemed to me, and she's in search of someone that will love her how she wants. Heinrich, the man who Anna is also in a relationship with, is the opposite of Mark essentially, he's adventurous and has an overly optimistic attitude to him and is accepting.He doesn't work out for Anna either, so out of her loneliness she creates her own person that fits her, the monster that forms into Mark eventually, which is why she proclaims that he is finished by the end. The doppelgangers in the film for me, were ment to be the perfect versions of each character that the other envisioned, but by the end of the film they realize that perfection is not what they fell in love with. There is a religious aspect to this film as well, that I don't really grasp yet but this film is so great because it's so open-ended with almost everything. I will definitely be rewatching this a ton.