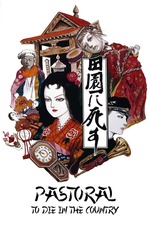 Pastoral: To Die in the Country

what's your first memory? i was only two years old, living in the suburbs outside of Birmingham, Alabama when i had first, and for pretty much the last time until recently, discovered snow. i kept getting pieces of ice from the snow stuck to my mittens while my brother pelted me with snowballs, which he seemed to have made so effortlessly. afterwards, my dad led me inside to a heater, which he proceeded to drop an ice cube into. i can still hear the distinct crackling sizzle, in my mind, still see the blueness of the room from reflected light on snow pouring in through the windows.

how much of this is truth? what really happened back then? how much of this is artificial, how much have i willingly or subconsciously filled in myself? Pastoral: To Die in the Country acts as the perfect follow-up to the smoldering adolescent frustration and anger of Throw Away Your Books, Rally in the Streets, trading it in for a full-on, focused bildungsroman based loosely on the childhood of the director himself, Shuji Terayama, better known in Japan as the founder of Tenjo Sajiki, the sho-gekijo theater troupe well known for causing havoc in Tokyo for about 30 hours straight at one point or another with their play-within-a-play, Knock.

Terayama's movies are usually extremely vibrant, splattered with several filters like coats of paint, cut up and put back together, loud, and this is no different. the true beauty of Pastoral, and what makes it work so well for me as someone who would consider themselves an artist, is that this autobiographical coming-of-age tale does not play out from year A to year B, it collapses in on itself and is put under scrutiny by the very man who's lived the life in question, decades after the fact, putting all the loose jigsaw puzzle pieces of memory into something familiar, cohesive, something that seems "right". when you put your own life under scrutiny not just for yourself, but for the sake of expressing it and working it out through the public forum of art, you are forced, often uncomfortably, to confront your past trauma. to leave yourself vulnerable. what you did, what was done to you, what's still there in your mind, what have you forgotten? for some, it can be hard to remember the distressful parts of your childhood, and the rose-tinted lens that seems to eclipse the notion of youth is often unavoidable, even for our director. Terayama confronts his past self to try and change things, rewrite his own story into a different one, but it's impossible and he knows it. you can't change a story if you don't know it by heart.

it's here, in his attempt of reconstructing a childhood, that you can find inklings of the reality of which Terayama himself lived, from the essence of his strong conviction against tradition, peeling back and revealing the aspects of humanity otherwise spoken of in hushed tones, even down to the little tents where he would later not only find his calling, but the place of which he belongs. not to that old, scary village full of misery and death he once knew to be home, but to the retrofitted streets and back alleys of Tokyo, away from who and what is considered right, and close to the outsiders, the misfits, the freaks: his many friends and contemporaries. the ones who can tell the time themselves.

incredibly touching in ways i could have never predicted.

"no one's memory is perfect. you'll find the things i've lost. that's called growing up. but i'll never be able to find the things you lose. too much time has passed. it's too late."