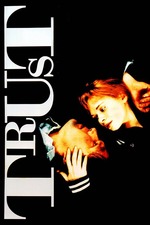 for as long as mankind has walked on this Earth, we have been plagued by one insistent question that permeates everything we do, say, and maybe even think, one that remains truly unanswered despite many attempts made. and no, it’s not any of that banal “what is the meaning of life” Hallmark greeting card B.S., it’s what really matters: what is love? and who better to answer this question than some dorky, tall white guy from Long Island, New York who watched Hail Mary one too many times?

but, all joking aside, Trust is a movie that hits a delicate balance of humor, tragedy, and empathy for me that few movies like it really hit, a deadpan, suburban ennui ridden post-Reagan romcom about a young girl, Maria, growing up and taking agency of her own body after being seemingly at the mercy of others, all through a romance with the local notorious intellectual mechanic troublemaker, Matthew, a romance that is predicated on (what appears to be) a mutual sense of admiration and trust. after they meet and talk to each other, and Matthew starts opening up while Maria starts taking up responsibilities previously un-taken, it becomes clear that both of these people have been through hell and back, both responsible for a parent’s death without their fully knowing of it, a burden placed upon them which neither asked for but received anyway. that one burden is what they share together, but Maria is the one who is carrying an even heavier burden, because it’s the woman who has more social obligations, burdens, and debts owed and never seeming to ever be paid in full to a male-dominated society. here, Hartley focuses on what one might call one of the primary burdens that a woman will carry, and that’s the burden of carrying a child for 8 months straight and being forced by society to have it, having your life altered forever regardless of your true want. Maria didn’t ask to be pregnant, but it may as well be as if she tried to willingly, her being dumped by Anthony (“How could you let this happen?”), her dad shortly before his inexplicable death (“Slut!”). one of the side plots involve a woman who desperately wants to be a mother, and since she’s unable to, she steals a baby. Maria tries to track her down by using her generic description of her husband, ultimately finding a broken, silent home where the woman is unable to live her dreams, while the man goes on countless vacations at the same place as everyone else like him.

hell, even someone like Matthew wanted her to have the baby, but Maria’s want for an abortion in an official abortion clinic seems to be inescapable, nearly every scene taking place in either Matthew’s or Maria’s house has this surgically, hospital-like white sterile nature to it, not just permeating the environments, but the conversations as well. people like to criticize Hartley’s outlandish, bookish humor for being much too clinical, unrealistic, but that’s part of his appeal; nothing seems essentially more human and relatable than trying to elaborately break down an emotion as complex as love into something as easily recognizable and simple as one plus one. i should also note that the movie itself is gorgeous as ever, the clinical color palette of their homes playing well against all the nature and blah of work and its associated walks.

even with it’s mostly feminist coding and technical/analytical writing, Hartley is sympathetic and ultimately caring to practically every character on screen, because everyone, as our main characters have been, is at the mercy of societal forces beyond their control. a woman’s husband dies, so she must grieve and hold whoever was responsible in contempt forever, play the part of the widow as society has seen fit, even if she was secretly as happy as can be about it, even going so far as to refer to it as a blessing. Matthew and Maria care about each other, and Maria is pregnant, so Matthew must get the 9 to 5 soul-crusher of a job fixing exactly the one thing he hates the most in order to support her when she has the baby, so they have to be married. neither of them wants this, they only think that they want this because its presented as the only option they can have. there’s even a reluctance on both of their parts to break these established cycles (“you keep the beat because you know the song.”), but ultimately, Maria recognizes sooner than Matthew, through being with, knowing, and growing because of her experience with Matthew, that the song has to fade out, that the cycle must be broken, and that no one else is going to be able to do it for her besides herself. Matthew was afraid to trust Maria out of a fear that he’d kill her, just like he killed his mother, but even without that part of the equation that Maria had come up with herself, it was clear that both were in a love, a fleeting love, one with a passerby who happens to be at the right place at the right time, a necessary love. the answer to the almighty question “what is love” may still yet to be answered fully and clearly, but Trust, in my mind, remains one of the most compelling and moving attempts at an answer for the age-old question, not just for the 90s, but for the 20th century as a whole.