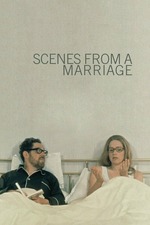 I watched the television version.

This film is everything Marriage Story wanted to be and more.

Ingmar Bergman’s Scebes in a Marriage (yes I will write it like that) is the most layered, intricate, and painfully specific depiction I have ever seen of a relationship. Liv Ullman and Erland Josephson are an absolute powerhouse of a duo, and both are able to perfectly portray such a wide variety of emotions in a span of a few moments. The story feels ambitious, but is told in such a humble and down to earth way (limited sets, actors, and physical action) that the story is never once overshadowed.

This is a 5 hour series, but I can say, without a doubt, I never once felt bored or uninterested in the story. Scebes in a Marriage is paced infinitely better than many 2 hour films, and uses it’s substantial runtime incredibly precisely. Honestly, this film just blew me away.

The only real issues I had with it was Bergman really didn’t try and make Johan likable at all until the end, and it made it a little hard to sympathize with him because he was unequivocally an asshole for a large portion of the story. Also there were a few moments and character reactions that felt a little out of place/illogical, but nothing too crazy.

I just wrote like three paragraphs about how this film depicts love in an unique and fascinating way but I deleted it because it felt like an incoherent tangent, but nonetheless this film is amazing and you should watch it.