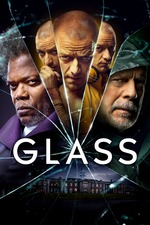 just wanted to get some scattered thoughts down on one of the best movies i’ve ever seen:

m night dares to make a distinction between the chaotic, illogical violence perpetrated by people whose abuse has rendered them unable to function in a world that doesn’t want them, and the systemic, hyper-logical violence of those who unfeelingly sacrifice lives to maintain control. everyone loves a good villain, because villains represent a litany of transgressive desires necessarily snubbed by the hero at the end to reassert social order. for mr. glass, it is the desire to impose logic on an illogical world, for kevin, it is the wonderfully cinematic desire to bury himself beneath a cast of characters. even in the fight scenes, shyamalan stays focused on the faces, these are *people,* before anything else. the point of shyamalan’s twist endings is that reality shifts depending on who’s telling the story, and the stories we tell have more power to bring us down or lift us up than anyone gives them credit for. in the end, mr. glass succeeds in visualizing a reality in which he, kevin, and david have a right to exist, and in the most beautiful moment of m night’s career (which is saying something), we see two affirmations of life on the brink of death: ”it isn’t so bad, being in the light;” “ i wasn’t a mistake, mama,” and mouchette rolls into the river.

(so much more to say, eventually. these are all the thoughts i could fart out right now but i didn’t do this wonderful film justice. anya taylor-joy’s character might have been my favorite and i didn’t even mention her. unfortunately not willing to shell out the $14.20 to rewatch this in theaters)