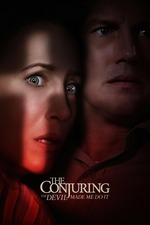 I liked it, I enjoyed it, it was fun well made, and not as long as 2. Nothing will ever come close to the original, but I wouldn't expect that. No question better than the spin off films, but it's not as if that is saying a lot. Farmiga and Wilson are great as usual, I have no problems with them making as many as these as they want. Will it have sustained repeatability, who knows? But if you want a fun 2 hour horror movie you could do a lot worse, just don't hold out hope for anything new or original.