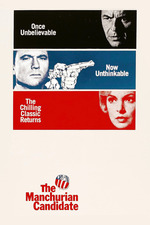 Such a great film, one of cinema's best villains of all time. It's not action packed, in fact Frank's Karate is hilarious, but it is a top notch political thriller. Only issue is length, I swear I always thought this film was like 2.5 hours long, it's only 2 hours long, but feels longer. I'm not saying it's boring, I just think it carries on from time to time, which is funny for a film nominated for best editing oscar. Despite that, still a classic must see great film.