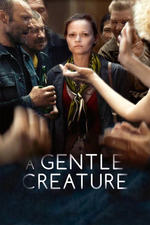 "Man is a wolf to his fellow man." A repetitive drama, then again the same was true of Songs from the Second Floor, a different kind of movie but another series of encounters - all shot in a single take, or very long takes - with a marked dystopian tone. The logistics are impressive but the human element is stronger than it was in Songs, the film never quite succumbing to grotesquerie, silent scenes of the heroine alone alternating with crowded panoramas (wolves live in packs, of course) seething with life; the early scene on the bus, with people glimpsed in corners of the frame behind other people, each with their weird-but-true story, plays like a curdled version of Italian neo-realism (the sense of sprawl also evokes Dostoevsky, as per the title). The problem isn't really corruption, though it's that as well - the setting is Russia rather than Loznitsa's habitual Ukraine, blemished with rights abuses and Soviet memories - more a hopelessness and heaviness of spirit, albeit leavened with gallows humour; if the gangster's story, ending on the punchline "And that's how they met again", doesn't provoke a shamefaced chuckle, you're in the wrong movie. The ending, too, is Songs-ish (only the huddled masses don't rise up in this case), though before that it swings into ornate fairytale and a rather didactic scene that seemed overlong at the time, causing me to dock it half a star in my head - but now I keep thinking about it, so I guess it must've worked. Obvious MVP: Maria Choustova, casting director.