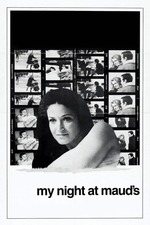 My Night at Maud's

i want to live in this movie, or maybe not in it as much as on the outskirts of it. in the coffee shop, in the church pew, at the beach, overhearing the conversations.

focusing on the concerned or despondent facial expressions of françoise & jean louis as we hear sunday's homily is an all time great scene. it reminds me of the end of the graduate, though with dissimilar conclusions.

'moral tale' in the most brazen sense, morals and ethics being talked about overtly--but i'm unbothered by it.

i'm unaccustomed to religion being approached with such a lack of rigidity, and without condemnation. there's a lot of compassion for these characters who are trying to find the best way to live their lives, and who're absorbed in the teachings of lessons they claim, but maybe do not follow. or overtly claim to follow, to avoid the truth of emotion & it's momentary whims. it's almost delusional, an excercise in control over your personal narrative. like punching-up without realizing it.